Where Should You Retire? (Part III)

Many of our clients have asked us a question over the course of our planning: “Where is the best place to retire?” Over the last two articles, we have surmised the best locations to retire, strictly from a financial perspective. In Part 1, we discussed the best income/property states. In Part 2, we examined the best states from an estate tax perspective. In this part, we will decide the top 5 states considering not only taxes, but also access to healthcare, cost of living, crime and climate/life expectancy. I would point out that unlike many of the studies done, we have weighted taxes, climate and healthcare as the most important aspects. For instance, while Alaska has far and away the best tax regime in the country, people are not flocking there in retirement.

It may not be a big surprise that the Aloha state is in the top spot. Hawaii boasts some of the best attributes for access to healthcare, crime, climate and taxes. Might as well get the obvious out of the way – Hawaii is simply paradise, and ranks at the top for its climate. According to a 2017 study by the Institute for Health Metrics and Evaluation, Hawaii boasts the highest expected average life expectancy at 81.15 years (for those individuals born in 2014), or over a full 2 years over the national average (79.08 years). So it is not only a breathtaking, beautiful place to live, but you get to live in such a place for a very long time. Hawaii also has consistently ranked the highest amongst healthcare in the country. Hawaii has the second lowest medicare costs per beneficiary in the country, according to a 2017 study funded by the Henry J. Kaiser Family Foundation.

Hawaii is overall a very safe state as well, with the 12th lowest amount of violent crimes per capita in the country (according to the government’s 2014 National Crime Victimization Survey). Hawaii is one of the happiest states in the country; in the 2016 Gallup Healthways Well-Being Index, Hawaii ranked as the state with the highest well being amongst its citizens. Hawaii does not tax private pensions nor social security benefits (public pensions are taxed). The state does tax defined contribution plans (I.E. 401ks) and IRAs, and does have an estate tax (but with a high exemption that dovetails with the federal exemption). Hawaii also has very low property taxes, with the lowest percentage of home value paid in property taxes (lowest effective rate). The only downside of the state is its very high cost of living, one of the highest in the country. But if you can afford it, this is a fantastic place to retire.

At this point you may be wondering, why am I reading this? You may have figured that the sunshine state would be on this list, but you may not have the full picture as to why. Florida has many of the same attributes as Hawaii, but without the concerns of living on an island. Like Hawaii, it is a warm and sunny place to live, with the Atlantic and the Gulf close by. Florida’s healthcare situation, while improving, is middling; Florida ranks 41st in healthcare access and 44th in treatment and prevention, according to the Commonwealth Fund’s 2017 Scorecard on State Health System Performance survey. However, this does not seem to bother Floridian’s life expectancy, as the average is 21st amongst all states at 79.48 years.

Florida also possesses one of the more advantageous tax regimes in the country, although it is not necessarily as advantageous as is often portrayed; the Tax Foundation ranked it 20th amongst all states for its state and local income tax burden. First, the good news – Florida has no state income taxes, one of just seven states that do not impose such a burden. They also do not have an estate tax. However, sales/local taxes average 6.65%, middle of the pack (29%), and property taxes, also middle of the pack (27th). The reason it remains #2 on the list is because Florida does not tax retirement account distributions OR social security, one of only a handful of states that does not tax either. The retirement tax benefits, warm climate and long life expectancy make Florida a great (albeit, expensive) place to retire.

If you are looking to retire, you could do a lot worse than Texas. The Lonestar State boasts warm weather, low, plenty of space, exciting cities, lively college towns and even charming small towns (not to mention, some of the best BBQ in the world!).

Texas has a few distinct benefits over many of the states in our list. First off, unlike Florida or Hawaii (or even the state next on the list), Texas has a very low cost of living. Missouri conducted a 2017 study of the lowest cost of living amongst all states, and Texas ranked as the 8th cheapest state to live. Texas also has another advantage – it is not overrun with people, including seniors, as the other states on this list.

Texas is also a very tax friendly state. Like Florida, Texas does not tax income, including social security, pension AND any other type of retirement income. There is no inheritance or estate tax either. Good food, nice people, lots of space, low cost of living and good taxes makes Texas a great state to retire.

Arizona comes in at #4 on our list, and like Florida, this has been a mecca for retirees. Arizona seems to get a bad rap for being excessively hot. For instance, Tucson has highs sometimes reaching over 120 degrees during summer. But the daily high temperatures from October to April generally remain in the ideal range of 65 to 85 degrees. Tucson excels at dry, sunny weather, getting only 12 inches of rain a year and staying sunny 85 percent of the time. Maybe the nice weather has to do with its residents’ high life expectancy, 18th highest in the nation.

Arizona’s taxes are quite modest as well. While there is a tax rate in the state, the highest rate does not kick in until $150,000 in income for married couples – most retiree’s taxes are in the 2-3% range. Social security benefits are not taxes. Arizona’s property taxes are also quite modest; unlike Texas, which imposes a larger than average property tax, Arizona has the 17th lowest average effective property tax rate in the country. There is also a nice tax break for seniors. To top it off, there is no state inheritance or estate tax in Arizona either. 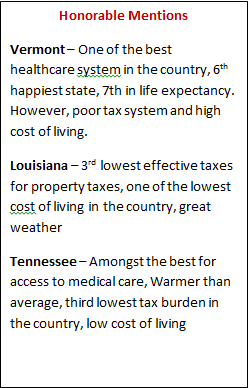 Georgia has much more to offer retirees than just peaches. Georgia offers balmy weather, southern charm and fantastic taxes. Georgia has a very modest cost of living, 6th lowest amongst the states.

At first glance, Georgia’s state income tax may scare away retirees – the highest tax rate is at 6%. However, Georgia loves its seniors, as a couple can exclude up to $130,000 in retirement income from the state income tax. Sales taxes are very reasonable at 4% as well. Property taxes are also quite reasonable within the state, and social security benefits are also not taxed.

If you scour the internet as we have, you will note several “best states to retire” lists. The way “best places to retire” lists are graded often misses the point: they don’t tell you much about what your life would be like if you lived there, because there’s just too much about your life they can’t possibly know or take into consideration. Plus, a lot of what’s desirable is completely subjective. One person’s tranquil small town might make another go stir-crazy, while someone from Texas might shiver just at the thought of moving to Maine. While we have devised our own list of criteria, yours may be completely different. In the end, your idea of your retirement must be just that, and only you can determine what is important to you. However, if you need someone to talk it over with, we are of course here for you.