Medicare is confusing as it is in terms of understanding what types of healthcare services are covered and in what capacity. If you add on the financial layer, Medicare will remind you of another amazingly complex governmental system – the tax code! In this second article on Medicare, we will take you through the financial aspect of Medicare Part A and B. If you missed Part I, we explained the services/products that Medicare covers within both Part A and B. In Part III of this article, we cover the gaps of Medicare and how to close them. 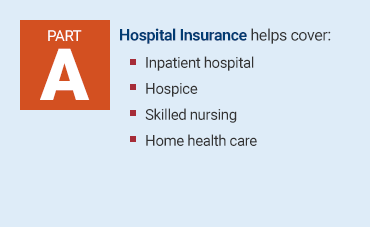 Part A – What is Better than Free?

The premiums associated with Medicare are very different amongst the different code sections. First and foremost, the easiest section of Medicare’s premiums to understand is Part A, since there are no premiums (in general)! For those of you who have jobs in which you have paid Medicare taxes (or are the spouse of such a person), you simply need to sign up at age 65, and there are no premiums. If on the other hand you have not paid into the Medicare system, the 2016 cost for Part A is $411 per month. For those that desire to continue working past age 65, it may be beneficial to ask your employer (or your employer’s health insurance provider) how your workplace health insurance will change if you do in fact enroll in Medicare Part A while continuing to work – every employer’s health insurance is different, so this may be a good first step.

On a general level, Part A covers (for the most part) institutional care in hospitals and skilled nursing facilities, as well as certain care given by home health agencies and care provided in hospices (for a broader context of what is covered, see last month’s article). On a broad level, Medicare pays for 90 days of hospital care per "spell of illness," plus an additional lifetime reserve of 60 days. A single "spell of illness" begins when the patient is admitted to a hospital or other covered facility and ends when the patient has gone 60 days without being readmitted to a hospital or other facility. There is no limit on the number of spells of illness. However, the patient must satisfy a deductible before Medicare begins paying for treatment. This deductible, which changes annually, is $1,288 in 2016. From day 61 through day 90, the patient pays a coinsurance of $322 a day in 2016. Beyond the 90th day, the patient begins to use his or her 60-day lifetime reserve. During hospital stays covered by these reserve days, recipients must pay a coinsurance of $644 per day in 2016. This reserve is not reset after each "spell of illness." Once it has been exhausted, the beneficiary will receive coverage for only 90 days when the next spell of illness occurs. Medicare Part A also pays for stays in psychiatric hospitals, but payment is limited to a total of 190 days of inpatient psychiatric hospital services during a beneficiary's lifetime.

Part B – The Opposite of Free 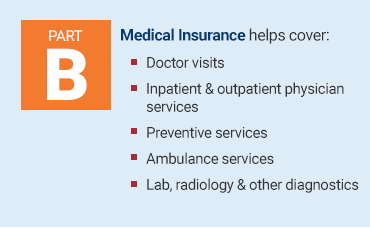 On a general level, Medicare Part B is the Medicare program that covers doctor bills and other outpatient costs. The two basic coverage rules are that care must be medically necessary, and it must be performed by a doctor who accepts Medicare payment. This means that before participants see any new doctor, they must make sure that the doctor accepts Medicare. Unlike Medicare Part A (which is generally free in most circumstances), Part B has a cost associated with it, and this cost is generally dependent on your adjusted gross income from a specific period. Medicare’s premium for 2016 is dependent on a) whether you have begun social security before this year and b) your adjusted gross income.

If you have begun taking social security before 2016, your Medicare Part B premium will be deducted from your social security checks. The starting point for premiums in 2016 for such individuals would normally have been $121.80 based on the increase year over year from 2015’s Part B starting point cost of $104.90. However, there is an odd exception under the social security rules known as the “hold harmless provision.” This law prohibits Social Security benefits from being reduced because of an increase in Medicare premiums if the cost increase in Medicare is above the cost of living adjustment for Social Security. Since there was no cost of living adjustment for social security in 2016, there cannot be an increase of Medicare premiums due to this rule, thus the premiums of last year ($104.90) is in effect. For those individuals who have signed up for social security in 2016 OR have not signed up for Part B, the premiums have in fact increased to $121.80. 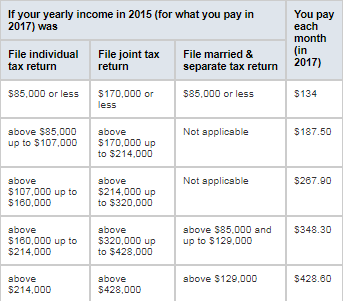 As noted above, the income utilized for purposes of determining your premium is usually based on your last tax return on file, which would be your 2014 return for 2016 premiums. However, you may be able to get the high-income surcharge reduced or eliminated if your income has decreased since then because of certain life-changing events, such as:

In that case, you can ask Social Security to use your more recent income instead. Contact the Social Security Administration, estimate your 2015 income, and provide evidence of the change, such as a marriage or death certificate, a signed statement of retirement from your employer, or pay stubs showing your reduced income.

Will Part B Premiums Skyrocket?

There is always a cause and effect in certain decisions made by the social security administration and Congress (and, well, the world of medicine), and the potential effect from rising medical costs and the hold harmless provision is skyrocketing Medicare premiums. While medical costs (mainly due to prescription drug costs) have risen dramatically in 2015, the hold harmless provision discussed above has held premiums static for the vast majority of Medicare beneficiaries in 2016 (70% or so). Naturally, the effect of this combination has led to a huge burden on the government, which can never be good for future beneficiaries.

According to a recent report issued by the National Committee to Preserve Social Security and Medicare, it is currently projected that premiums may rise by 22% for those Medicare beneficiaries not covered by the hold harmless provision, from $121.80 to $149.00 (this includes those not taking social security but are on Medicare Part B and any new beneficiaries). The report estimates that higher-income beneficiaries would see even higher jumps in premiums next year — from $166.30 to $204.40 a month for the lowest affected tax bracket, and from $380.20 to $467.20 for those in the highest. Thus, we highly suggest that you try to lower your Medicare Part B premium by taking advantage of the reduction strategy noted above (in bold) if possible.